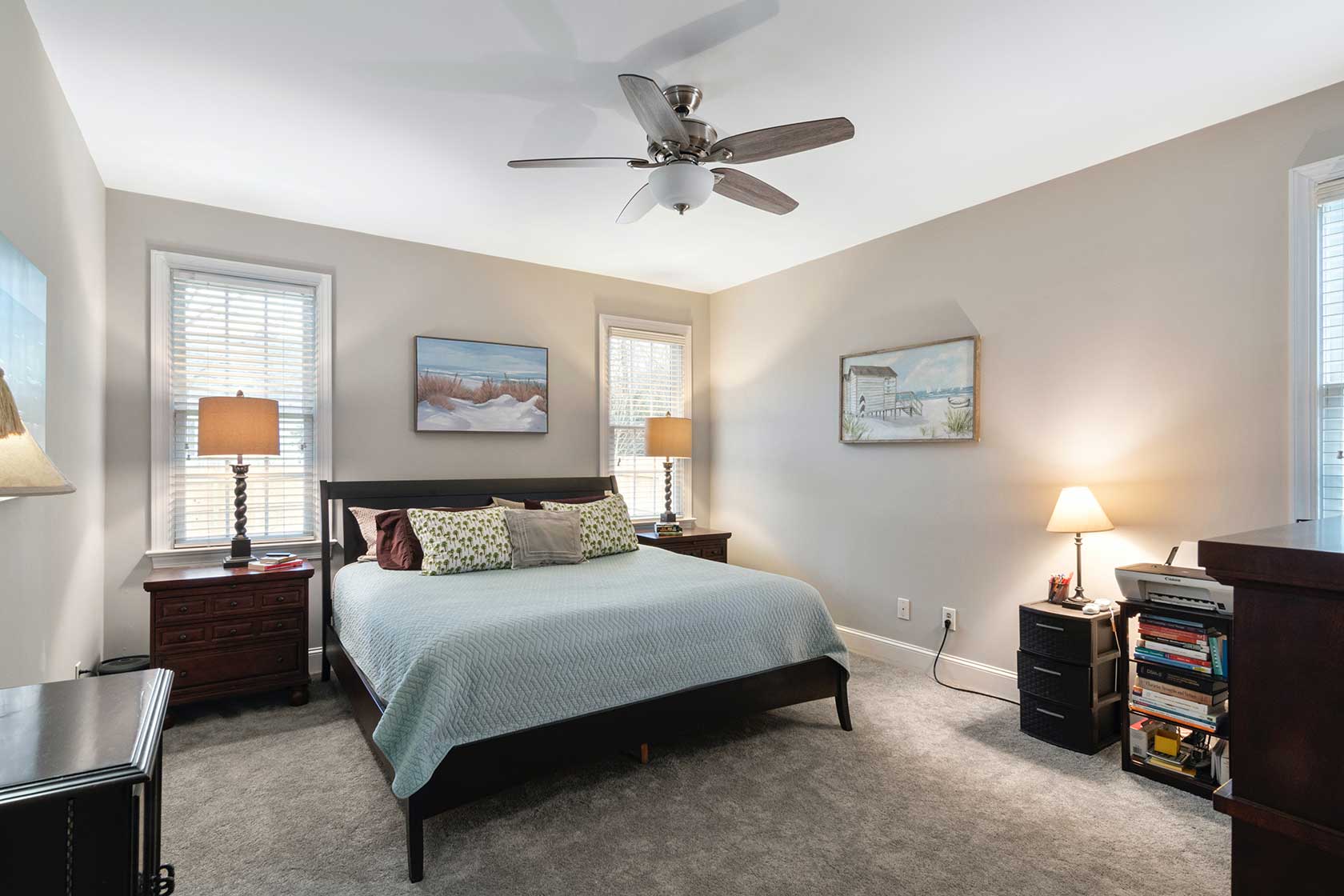 If you’ve never had a ceiling fan before, you’ll be surprised by how much difference one can make to your home’s comfort and at a fraction of the cost of adjusting the thermostat. But with the vast range of ceiling fan choices available to homeowners today, it’s not always easy to choose just the right fan for your space.

Ceiling fans start as small as 29 inches across and go up to 60 inches or more. They come in many styles, so you should be able to find one that matches your decor. Pay attention to important features like airflow rating, fan profile, and a number of blades when shopping for a ceiling fan. Here’s what you need to take into account.

The size of the space to be cooled by the fan will determine the appropriate fan size. The general rule is that the larger the area, the larger the fan. If it’s a small room, you’ll need a small fan.

Fans are measured from the tip of one blade across to the tip of the corresponding blade. If the fan has an odd number of blades, its measurement is twice the number of inches from the tip of one blade to the centre of the motor housing. Rooms of 50 square feet or less can get by with little 29-inch fans. These kinds of fans are often industrial in style, and caged fans are hot right now. For rooms up to 75 square feet, choose a 36-inch fan. Go up to 42 inches for a 100 square foot room, 52 inches for a 225 square foot room, and up to 56 inches or more for rooms of 400 square feet or more.

A ceiling fan that doesn’t move air the way you want it to is pointless. To some extent, that’s why it’s important to get the fan size right — a fan that’s too small for the space it’s in won’t move enough air to make much of a difference. But the fan’s diameter isn’t the only thing that contributes to how much airflow a fan creates. You also need a powerful fan motor.

Look at ceiling fans with a high cubic foot per minute (CFM) rating. This measurement quantifies the strength of the breeze a given fan creates. A good fan should have a CFM rating of 4,000 to 5,000, but you can get fans with a CFM rating of 6,000 or more. The larger the space the fan will service, the higher the CFM rating should be.

Choose a ceiling fan in a style that goes with your decor. You can choose a sleek, modern fan with clean lines and perhaps only two or three blades. You can get an urban chic industrial style fan with propeller-style blades or caged blades. You could choose a tropical style fan with leaf-shaped wicker blades or something rustic with distressed wood blades and cast-iron fittings. Or you could go with a traditional five- or six-blade ceiling fan. 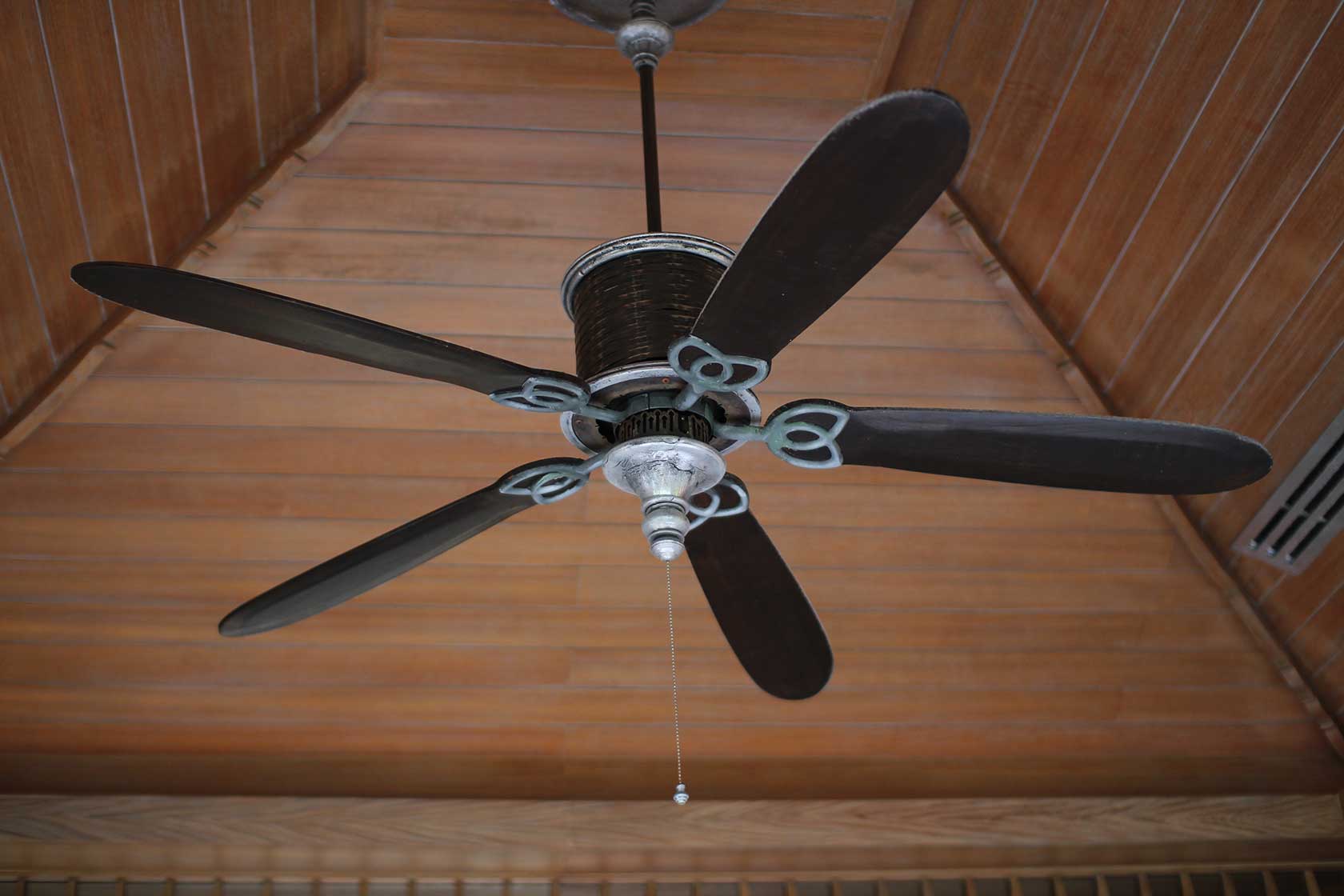 Fan profile refers to how high or low the fan hangs from the ceiling. Most fans will come with a down rod of about 12 inches so that you can mount the fan at a distance of seven to eight feet from the floor. In an average house with nine-foot ceilings, that will work just fine unless you’re hanging the fan from a slanted portion of the ceiling. In that case, you’ll want to grab a longer downrod that will allow you to lower the fan enough to keep the blades clear of the wall. If you have low ceilings, you can grab a low-profile ceiling fan that will hug the ceiling instead.

With today’s fan motors, the number of blades you choose for your new ceiling fan is more of an aesthetic choice than a functional one. Generally, the fewer blades a fan has, the more minimalistic its style. Two- or three-blade fans look sleek and clean-lined, while fans with eight or nine blades look industrial and urban. Fans with four to six blades should fit well into contemporary and traditional decors.

Choosing a ceiling fan isn’t always easy, but it’ll all be worth it the first time you feel that cool breeze on a sweltering day. The right fan in your space will keep you comfortable, and keep your power bills down, too.

How To Refresh Your Living Room On A Budget

How To Decorate The Wall Of Your Living Room