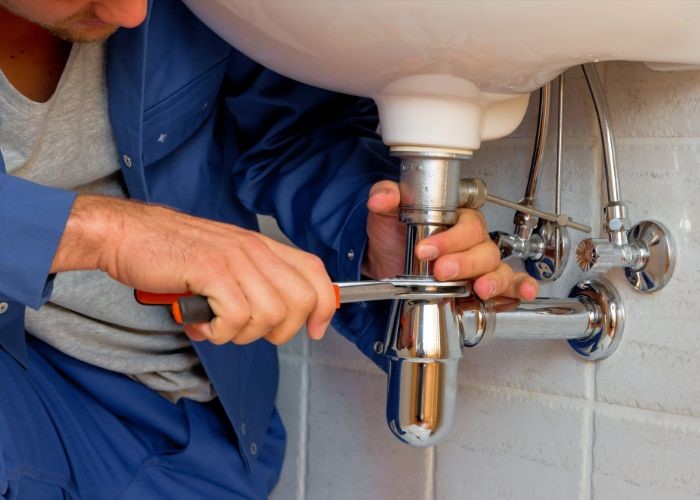 If you’re like most homeowners, you don’t think about your home’s pipes and taps until you need a plumber in Princeton, NJ! While a burst pipe, clogged toilet, or lack of running water all indicate a plumbing emergency, there are a few other signals that it’s probably time to call a plumber. To ensure your home’s plumbing is in good working order, check out 9 easily overlooked signs that you need a plumber in Princeton, NJ!

Discolored pipes often indicate a leak or excess moisture, which can lead to a burst pipe! Remember that a home’s plumbing pipes are under pressure; this pressure encourages proper water flow into and out of the house. Destabilizing those pipes can risk splits, cracks, and other damage, and expensive flooding.

Along with moving solid waste through the home’s pipes, that plumbing system should also be venting gases and their odors out of the home as well. If you notice noxious odors coming from taps or drains, this can mean a buildup of solid waste inside the pipes, a blocked vent not releasing gases out of the home, or an outside leak. Whatever the case, call a plumber in Princeton, NJ, rather than assuming those unpleasant smells are just to be expected.

Hard water buildup on a faucet or showerhead can slow down water coming from that tap. However, low water pressure from clean taps or multiple taps can mean a leak in the plumbing pipes. This leak lets water drip out of the pipes before it reaches those taps.

A leak can lead to clogs and burst pipes, but it also encourages mold growth along with a home’s framing and drywall. Rather than ignore this issue or try to swap out those taps and showerheads, thinking this will solve the problem, call a plumber when you notice low water pressure in your home.

An occasional slow drain doesn’t necessarily mean you need to call a plumber, as grease or soap scum buildup can result in a slow draining kitchen sink or tub. Addressing this issue with baking soda and vinegar, thick dish soap, a plunger, and other such household fixes can often get that drain running freely again in no time.

Consistent slow drains usually mean a much more serious problem, such as a water leak. Proper water flow is needed to remove solid waste through a home’s plumbing pipes; if that water leaks, solid materials build-up, and drains move slowly. Rather than repeatedly dumping harsh cleaners down those sinks and tubs, call a plumber for repeated slow drains in your home.

A home’s plumbing should work properly even in the dead of winter! If you notice a sudden drop in water pressure or, worse yet, no water at all, this often indicates ice buildup or frozen pipes. Since water expands as it freezes, frozen pipes often suffer cracks, especially around connectors.

However, the ice in the pipe will block water from reaching that cracked area. Once that ice begins to melt, and the water starts flowing, the pipe might then burst. To avoid this damage and resultant mess, call a plumber if you notice any sudden plumbing problems in winter.

If you pay for water in your home, it’s helpful to keep an eye on those monthly costs, and not so that you can budget accordingly! If a sudden spike in your water bill is not because of a rate hike, new appliances that use more water, another individual moving in so they’re using added water, call a plumber. Your home might have a water leak that is costly and wasteful and can risk future plumbing damage.

As water leaks from a plumbing pipe, it will often land on drywall panels, either along a home’s walls or ceiling. As that dampness makes its way to the front side of those panels, you might then notice bubbling, peeling paint, discoloration, flaking, and other signs of damage.

Don’t simply sand down and repaint or otherwise repair drywall panels when this happens, but call a plumber first. They should cap off that leak, and then you can repair or replace than drywall.

Discolored water can be the fault of your water supplier; if your city does not have proper filtration methods in place, for example, water coming from your taps can look brown, cloudy, or otherwise dirty and unpleasant. On the other hand, rusted or damaged pipes can also mean dirty, clouded water.

Damaged pipes might allow dirt and other sediments from outside to seep into the pipes, while water can also pick up rust from corroded pipes. In turn, that water will look very unsightly once it reaches your taps and showerheads. Call a plumber in this case, so they can pinpoint the cause of the problem and make needed repairs.

An occasional clog might be expected in a home with slow drains and can be addressed with a plunger or baking soda and vinegar combination. Persistent clogs are not to be expected and typically need the services of a plumber!

Persistent clogs can result from plumbing leaks. Water is needed to move solid waste through plumbing pipes, as said, so a leak can allow solid materials to build up, leading to clogs. Cracked outside pipes also allow dirt and sediment into the pipes, risking clogs.

Plumbing pipes are also installed at a slight angle to encourage water flow. If a pipe is not installed properly, water and solid materials won’t drain away, so clogs then form. A plumber can adjust that pipe and repair or replace hangers and other connectors as needed.

Keep these points in mind and call a plumber in Princeton, NJ, if you ever notice these 9 signs of potential plumbing damage in your home. Scheduling repairs as needed keeps that damage and your repair costs to a minimum and helps ensure your home’s plumbing is always in good working order.

Why Should You Call A Plumber?