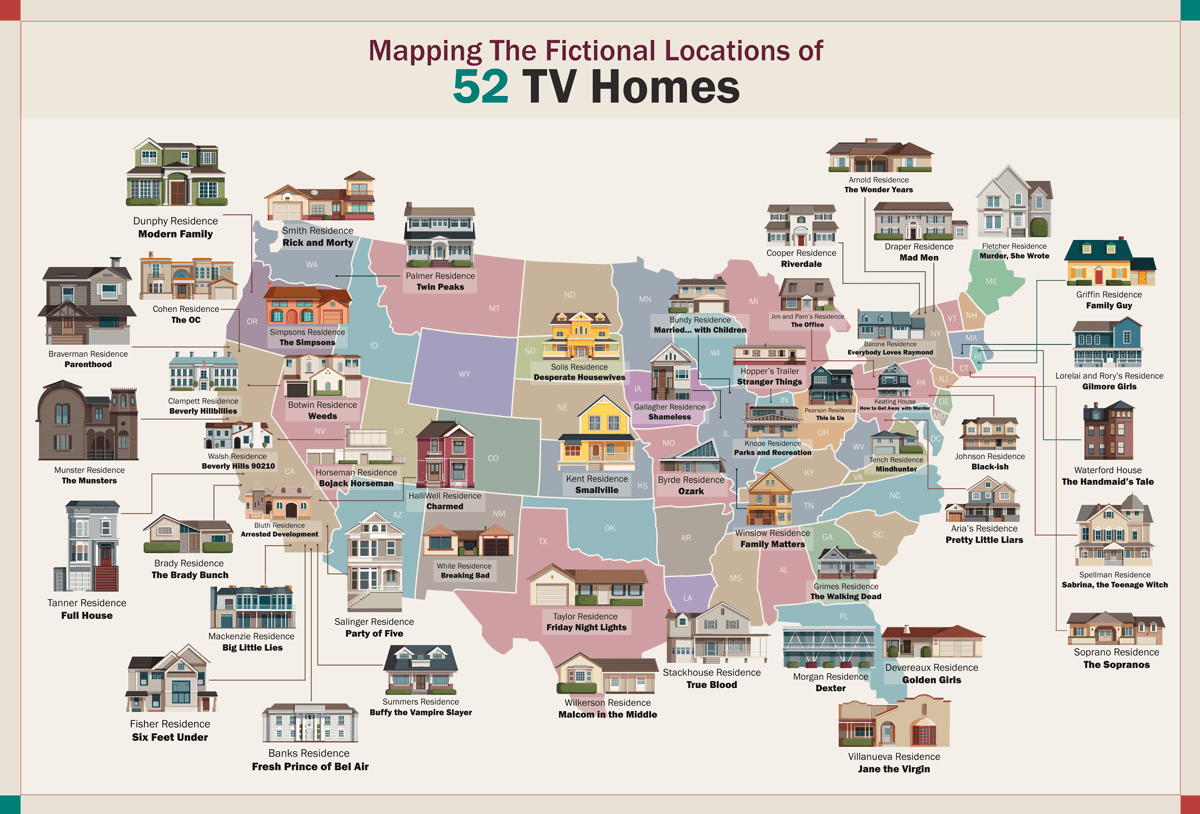 There are many interesting ways to learn about the architecture of American homes, but few are as fun as watching and analyzing the houses of television’s top shows. Okay, so most TV homeowners have houses that are bigger than you might expect someone of their (fictional) income to have. But we can put that down to ‘fantasy’ (or the need for space to move those big heavy television cameras) and enjoy the homes that are a bit bigger, fancier, stranger, and more iconic than those on the average American street.

A new graphic from HomeAdvisor does just that. They’ve curated an astonishing collection of 52 American TV homes and created a virtual postcard for each one – and an online map of the whole thing.

It all starts with the weird and wonderful: the Bluth home from Arrested Development. Famously living in a ‘model house’ or show home in the middle of undeveloped nowhere, the house is, in fact, very real – and exists at the heart of a bustling neighborhood! We think it’s the turret that makes this a truly stand-out property. After all, who hasn’t wanted to live in a castle? Perhaps Arrested Development was a fairytale after all.

A real TV fairytale from the olden days, Beverly Hillbillies was a show about a low-income family who struck oil on their humble Ozarks land and moved to the swanky end of Beverly Hills to live it up (much to the dismay of the neighbors). The house used for the show is a French Neoclassical-style mansion. It was designed, pre-war, by architect Sumner Spaulding, and was set to become the most expensive house in America when it went on the market for $245m in 2018.

Ultimately, the 10-acre Bel-Air estate sold for a meager $150m, still making it the most expensive house in California. The main house is 25,000 square feet, and the guest house alone has five bedrooms. The property also features a 75-foot pool, tennis court, 12,000-bottle wine cellar, and gardens that look like they were airlifted (at a price) from Versaille.

A more modest property was chosen for witchcraft show Charmed (and also featured in the video for Michael Jackson’s Thriller). It is a Victorian-era townhouse, built in the Eastlake style, a subdivision of the Queen Anne style of architecture. The Eastlake style was a tastefully simplified version of more ornate styles of the time, and hinted at the onset of modernism in its preference for geometrics and sometimes starkly rational lines over the bombastic curves of its contemporaries. However, it was primarily a decorative style applied almost as a façade to other types of structure – which means it is not impossible for DIY-ers to add an Eastlake flavor to their homes today!

Choosing A Modern Home Design To Enjoy Your Home