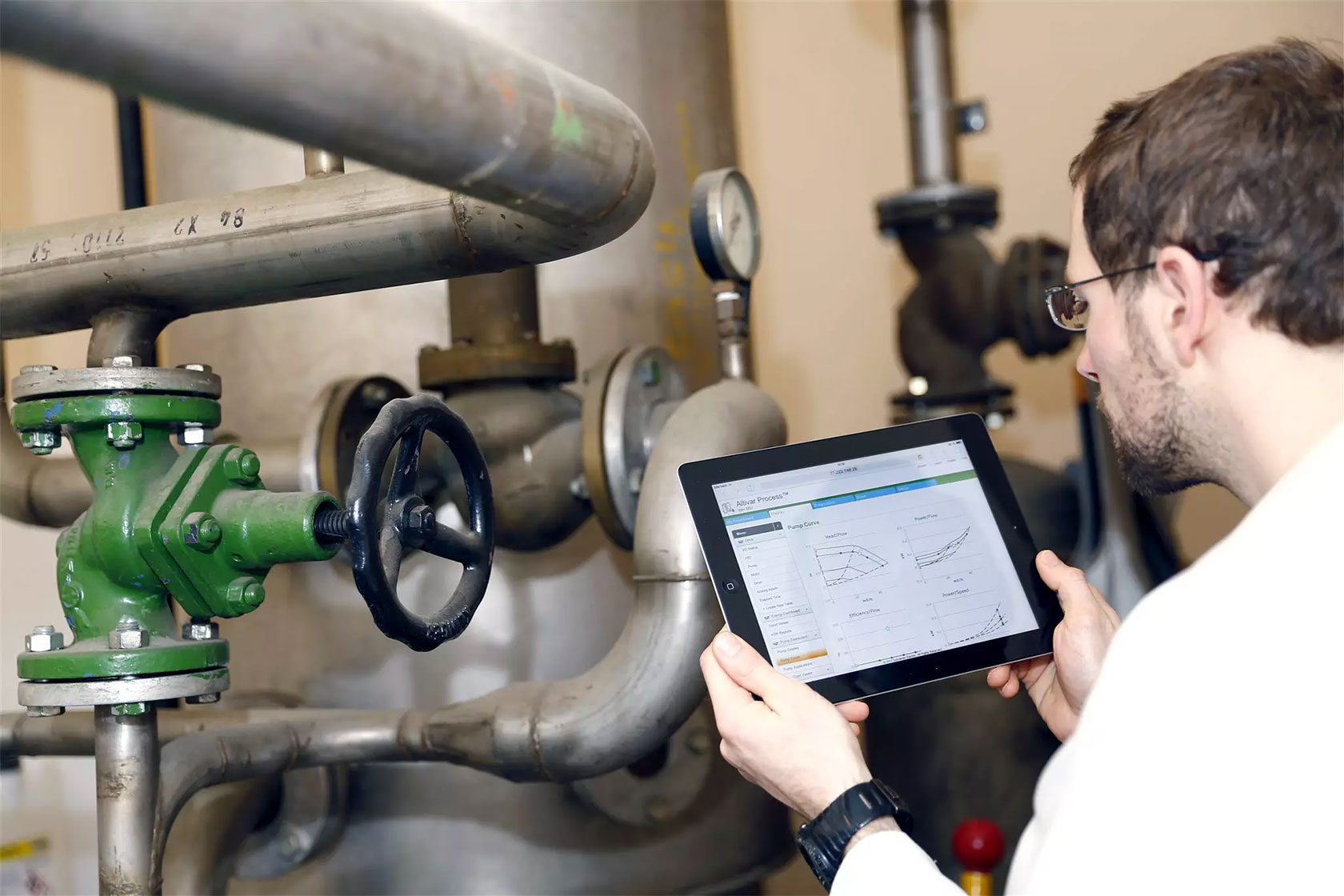 What Is A Variable Speed Drive?

Variable speed drives system, also called variable frequency drives, are a valuable tool for the energy manager. A variable speed drive or VSD’s primary job is to regulate how much energy is sent from the mains to the process. Drives with variable speeds are located between the power source and the motor. A drive receives electricity from the electrical source, and the drive then controls the amount of power delivered to the motor.

The input power is passed through a rectifier inside the drive, which changes the incoming AC power to DC power. The capacitors inside the drive are supplied with DC power. In order to give the clean power supply for the subsequent step, this is done to smooth out the electrical waveform. The inverter converts DC power from the capacitors into an output AC power, which is then sent to the motor.

This stage enables the drive to modify the frequency and voltage delivered to the motor in accordance with the demands of your running process. This means that you operate your AC motors at the speed or torque necessary to meet the demand. This is why adopting AC drives can result in significant financial savings.

Finally, variable speed drives to assist you in lowering maintenance expenses, waste, and even ambient noise pollution in addition to conserving energy. They are a fantastic approach to achieving your environmental objectives.

How Does A Variable Speed Drive Work?

A variable frequency drive receives a fixed AC (alternating current) voltage and frequency, converts it to DC (direct current) using a rectifier bridge, filters the DC using a capacitor bank and inductors, and then inverts the DC voltage back to AC before sending it to the motor at the chosen frequency.

A microprocessor or digital signal processor (DSP) controls motor operation and scans for errors while communicating with the PLC and user (through an HMI or keyboard). Additionally, control circuitry organizes power device switching to activate the power components in the proper order.

Where Are Variable Speed Drives Used?

A variable speed drive’s (VSD), as mentioned above, it’s the primary job of regulating how much energy is sent from the mains to the process. Drives with variable speeds are located between the power source and the motor. A drive receives electricity from the electrical source, and the drive then controls the amount of power delivered to the motor.

These motors are all powered by electricity. They require the corresponding quantity of electric energy in order to perform their function of generating torque and speed. All of these motors use electricity to provide the required torque or speed. Mechanical controls will be employed to slow down shift or control output if that torque or speed is too high or too low. As a result, there is a lot of energy and material waste. The speed of the motor must exactly match what is needed by the process. Without a more effective method of speed management, a lot of energy is lost, which is bad for business for everyone.

Operations become efficient and function smoothly with a variable speed drive because processes adapt to the demands of a specific application. As a result, the following issues are typically not an issue in facilities where machines have VSDs:

How Do Variable Speed Drives Save Energy?

Variable speed drive system has the unique ability to control speed, which accounts for their notable advantage of energy savings. The energy savings from variable speed drives will likely be most noticeable in applications like fans, pumps, and compressors because the loads on these devices rise with speed. The flow curve is significantly altered when fans’ and pumps’ flow rates are changed with a VSD, which reduces the necessary power.

However, not all applications are suited for variable-speed drives. But they can significantly cut expenses and save energy in a variety of industrial plant and office building operations. The list that follows covers a few of these.

Engineers sometimes match the motor size to the duty cycle’s highest demand. Only during startup or for brief periods of time may this peak happen.

One of the best reasons for installing a variable speed drive is the link between speed and power, known as the cube law. Rarely is the full-speed operation of fans and pumps necessary. Consequently, a VSD device can control motor speed to fit the requirements of the application and save a large amount of electricity.

Variable speed drives are programmable and have a certain level of intelligence. They can manage a number of motors when used in conjunction with sensors and feedback loops. This may result in substantial energy savings throughout an installation.

The variable speed drive is made to regulate parameters to operate a motor. The frequency has a direct relationship with the speed. As a result, the technology-determined speed of the motor shaft rotation can be maintained by adjusting the frequency.

There Are Three Basic Types Of VFD Drives

It has a long and prosperous history in industrial power equipment and signal processing. An inverter circuit known as a current source inverter converts the dc current at its input into an equivalent ac current. It is sometimes referred to as a current fed inverter and is abbreviated as CSI. Instead of a dc voltage source, a stiff dc current source is used here as the circuit’s input.

It does not allow for regeneration, has a low power factor, and can generate motor ripple at frequencies below 6 Hz. A voltage source inverter, often known as a VSI, is a converter that changes a voltage’s waveform from one that is unidirectional to one that is bidirectional or from DC to AC. The optimum voltage source inverter maintains a consistent voltage throughout the operation.

These are the most widely used drive types because they have a superior input power factor, no motor ripple, great efficiency, and are less expensive than alternatives. To adjust the frequency and voltage provided to an AC motor, pulse width modulation (PWM) VFDs offer a more sinusoidal current output. PWM VFDs are more effective and frequently offer higher performance levels. A converter, DC link, control logic, and an inverter are the components of a fundamental PWM VFD.

The main advantages of choosing variable speed drives are improved operational efficiencies, reduced energy usage, and cheaper operating expenses. These are a few of the many benefits they offer, though.

Here are more reasons why you should take advantage of variable speed drives to improve the energy efficiency of your various applications, such as pump, fan, conveyor, and compressor systems:

By operating the motors at partial load, variable speed drives consume only the necessary amount of energy, reducing the drive system’s energy usage by up to 50%.

Drives provide for the reduction of mechanical equipment stress during startup and operation, resulting in extended equipment lifespan.

In pump and fan applications, the VSD investment can quickly pay for itself after installation, thanks to the instant reduction in electrical consumption.

The system controlled by drives can be automated, eliminating the need for manual labor and saving on labor expenses and man-hours.

The usable life of an electric motor can be increased by carefully controlling its activity. Motors can initially require up to eight times their typical load if left to run on their own. VSDs, also known as variable frequency drives, start a motor at zero voltage and gradually ramp it up. As a result, the motor experiences less wear and tear because less power is required to activate the mechanism.

Facts To Consider When To Use And Not To Use VSD

It’s helpful to learn as much as you can about Variable Speed Drive (VSD) as a tool and what it can do, whether you already use a variable speed drive in your line of work or you’re considering buying one to improve production efficiency in your facility. Here are four things about these drives you should be aware of.

Fact #2: There are three different designs for a variable speed drive: voltage source inverter, current source inverter, and pulse width modulation (PWM) (VSI). The PWM drive is the most often utilized because it can operate with a variety of motor sizes. Although the CSI drive necessitates a sizable internal inductor and motor load, it regulates currents with dependability. The VSI drive is comparable to the CSI drive; however, unlike the CSI drive, it does not regulate currents.

Fact #3: A very flexible tool is the variable speed drive. Anything from fans to pumps to air compressors can be run on it. Unfortunately, not all of the drive’s applications have yet made it to the international market.

Fact #4: The main advantage of a VFD is that it makes the motor it is attached to more efficient. It achieves this by changing the energy input driving the motor in accordance with particular output requirements. If it’s not necessary, a motor shouldn’t be running at maximum power.

With more knowledge about these Variable Speed Drives, you can decide whether to use them in your facility’s operations with more assurance.

If you’re interested in buying a variable speed drive for your company, get in touch with us right away by visiting https://www.se.com/th/en/ for a selection of high-quality solutions. This is not only for effectiveness and sustainability but to provide digital energy and automation solutions wherein everyone can utilize their resources and energy to the fullest.

Choosing The Right Roses To Buy In Bulk