Home Decor Infographics How Will The 2020 Presidential Election Affect The Housing Market? 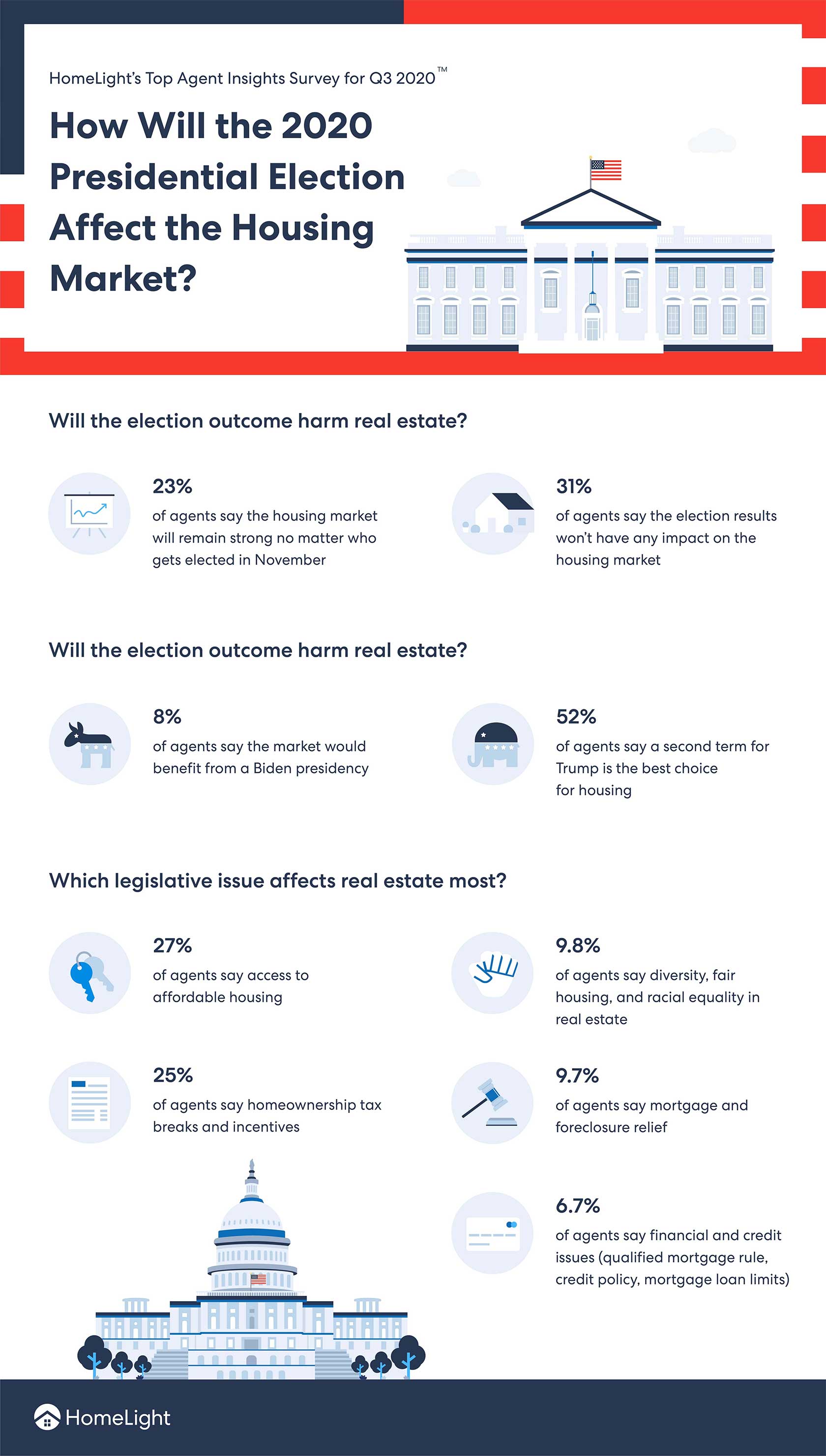 Election 2020 is on everyone’s minds right now across the country. What will the outcome mean for the economy, jobs, healthcare, and those looking to buy or sell a home? The experts at HomeLight asked top agents to weigh in on the upcoming election to see their predictions for what a democratic or republican outcome might mean for housing in specific states and across the nation.

The Current State Of Real Estate

Agents across the country, on average, are reporting an overwhelming sellers’ market. That means prices are on the rise and inventory is low, as many people are looking to relocate for more space, and moving from the cities to the suburbs after weeks of staying at home to follow shelter in place orders. The results are bidding wars, where buyers may face fierce competition to land the home of their dreams. Agents say it’s not clear whether this will continue, with a change in government leadership, or not.

You might be surprised that not all agents believe that the election will affect the housing market. A significant 23% of agents said that it doesn’t matter who gets elected in November — the housing market will remain strong, while 3% said the market is in for a major rough patch, no matter who wins the election. Meanwhile, 14% said they were undecided as to which candidate would be the best for housing.

Insights From Coast To Coast

Insights from top agents vary as we move across the country, with outlooks in many cases coinciding with Red vs. Blue states. Support for Biden’s influence on housing is most concentrated in the Northeast (14%) and Pacific (12%) regions. But offering a more balanced view, a third of California agents are confident that real estate will remain strong regardless of the election outcome.

The Mountain and South Central regions trend higher than average for Trump among agents, at 58% and 63%, respectively. In Florida, the number of agents who say a Trump win will be favorable for housing runs 6 percentage points higher than the national dataset from the survey. Moreover, 57% of agents in Texas believe that the housing market benefits from republican leadership.

Whatever your real estate goals are for 2020, the word on the street from agents can leave you confident to move forward with your plans without worrying. If there is anything we have learned this year, it’s that everything is adaptable, no matter what unexpected circumstances might be introduced into our lives. With a professional real estate agent supporting you, you can be prepared for whatever might come up in this unprecedented election year.

Real Estate Business In The UK: Effects Due To COVID 19

The 5 Tips To Property Investing You Need To Remember