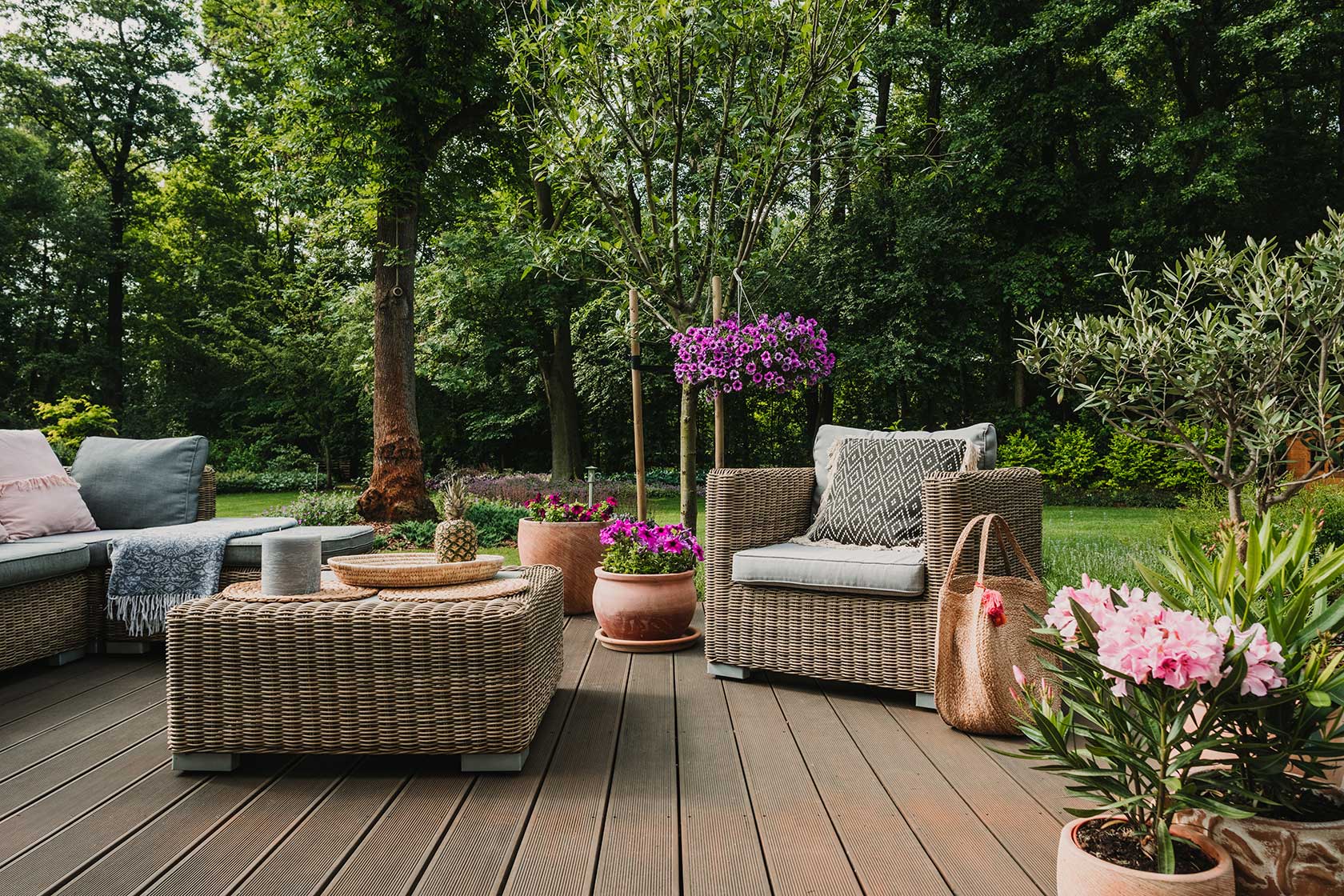 The volcanic island of Lanzarote in the Canary Islands owes a lot to one person: César Manrique. Cesar Manrique was a painter, artist, architect, and designer of spaces. Everyone in Lanzarote knows Manrique, respects him, and, we could say, adores him.

This genius of space design (both interior and exterior design) was key in the development of tourism in Lanzarote in a sustainable way. When other islands of the Canary archipelago were building huge holiday resorts driven mainly by speculation, Manrique and other prominent people from Lanzarote thought that on this island, the development of tourism should go hand in hand with nature. Everybody speaks today about sustainability, but when this group of people worked on the tourist development of Lanzarote and used this word, they were true pioneers.

Manrique’s legacy is present in countless places on the island of Lanzarote. It is a source of inspiration for its inhabitants, who look to Manrique’s design works for inspiration for their own houses and gardens.

In this article, we will pay attention to the inspiration that the works of Cesar Manrique provide for the design of a garden. If you are more interested in interior design, we recommend paying special attention to some of his most outstanding works for inspiration: El Mirador del Rio, the Casa de César Manrique (today headquarters of the César Manrique foundation), and the Casa Museo del Campesino. All these works combine the black colours of the local volcanic rock with the white used in ceilings and walls to reduce the interior temperature. Soft curved shapes favour spaces full of light, and that invites you to relax. Decorative elements linked to the popular culture of Lanzarote and countless plants that provide a touch of nature and greenery are key in the design of the spaces.

Let’s focus now on the inspiration for gardens. Manrique’s work provides some examples of enormous beauty in which utility also plays a fundamental role.

Among Cesar Manrique’s best-known works, there are four that can serve as the perfect inspiration for people looking to decorate or design their gardens. We refer to the Cactus Garden, the fascinating Jameos del Agua, the botanical cathedral at the Melia Salinas hotel and the Lagos Martianez or Martianez Lakes. The first three projects are located in Lanzarote, while the Lagos Martianez is located on the nearby island of Tenerife. 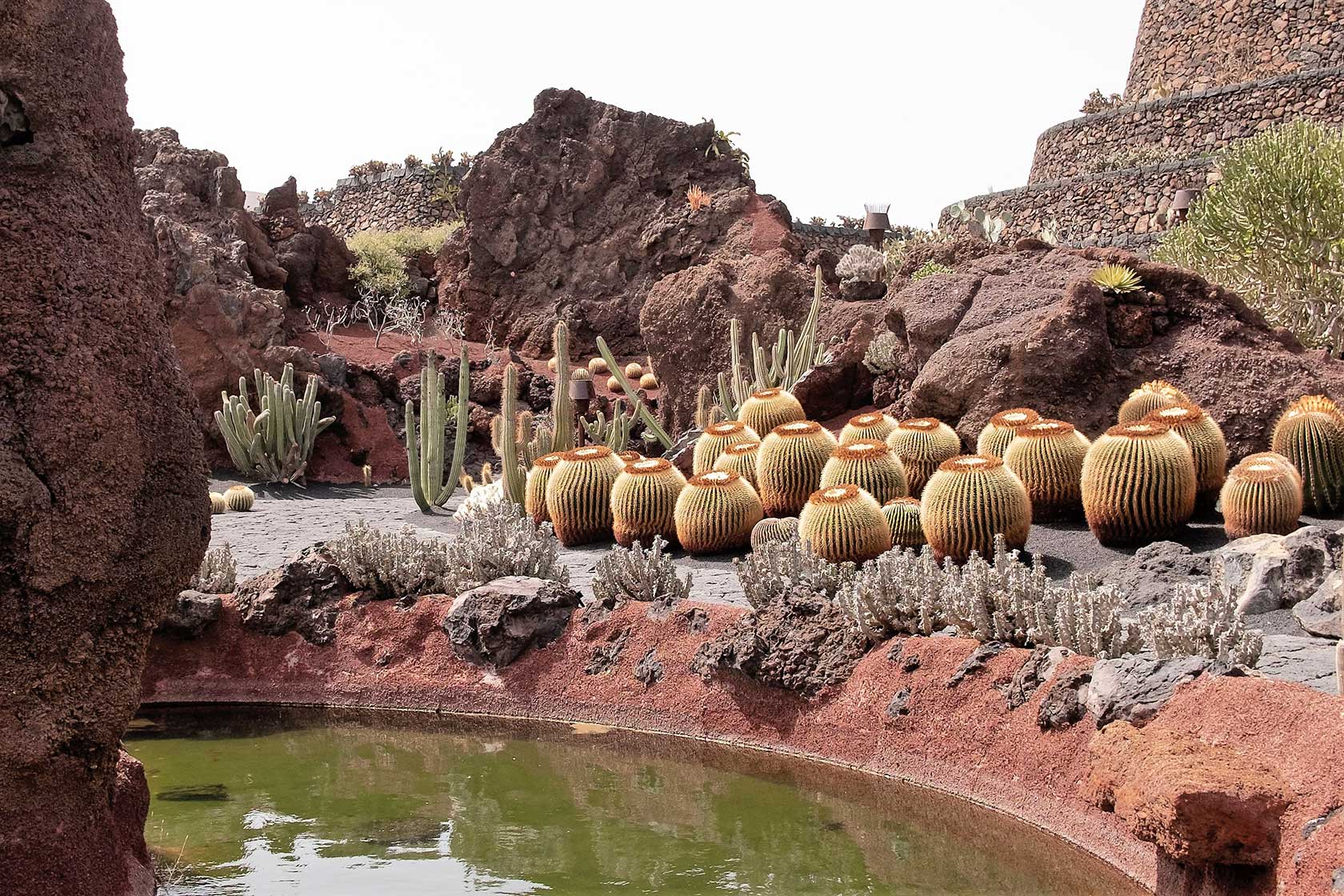 This garden is a monument to the cacti that populate the soils of Lanzarote. This is the last work that César Manrique did before his unexpected and sudden death in a traffic accident.

The Cactus Garden is located in the north of Lanzarote, and it does not matter at what time of year it is visited; there will always be flowers amongst the more than 10,000 cactus in the garden. One of the things that most surprises the visitor to this garden is the bright and striking colours of the flowers of these plants: yellow, orange, pink or purple stand from the close to 1000 species of cacti present in this garden.

The garden collects species not only from Lanzarote or the Canary Islands but from many other countries. It opened its doors in 1990, and since then, some cacti have grown to an enormous size that surprises visitors to the complex. Growth is something so important when designing gardens… The greatest inspiration that we can find in this space is in its origin. Before the development of this project, the cactus garden was an abandoned space, a place where rubble from different works was thrown.

The garden is arranged in volcanic stone terraces that protect the plants from the wind with walls of the same material. The garden has received many awards for its design.

Cesar Manrique wanted to heal with this garden a wound that the work of man had inflicted on the natural space. The garden is not conceived as a science museum on the cactus but as a pictorial landscape in a surrealist style. Manrique’s work as a painter is present in the design of the garden, which is intended for enjoyment and leisure, for the visitor to participate in a work of art raised with rocks, ashes, water and plants.

Gardens Of The Melia Salinas Hotel In Costa Teguise 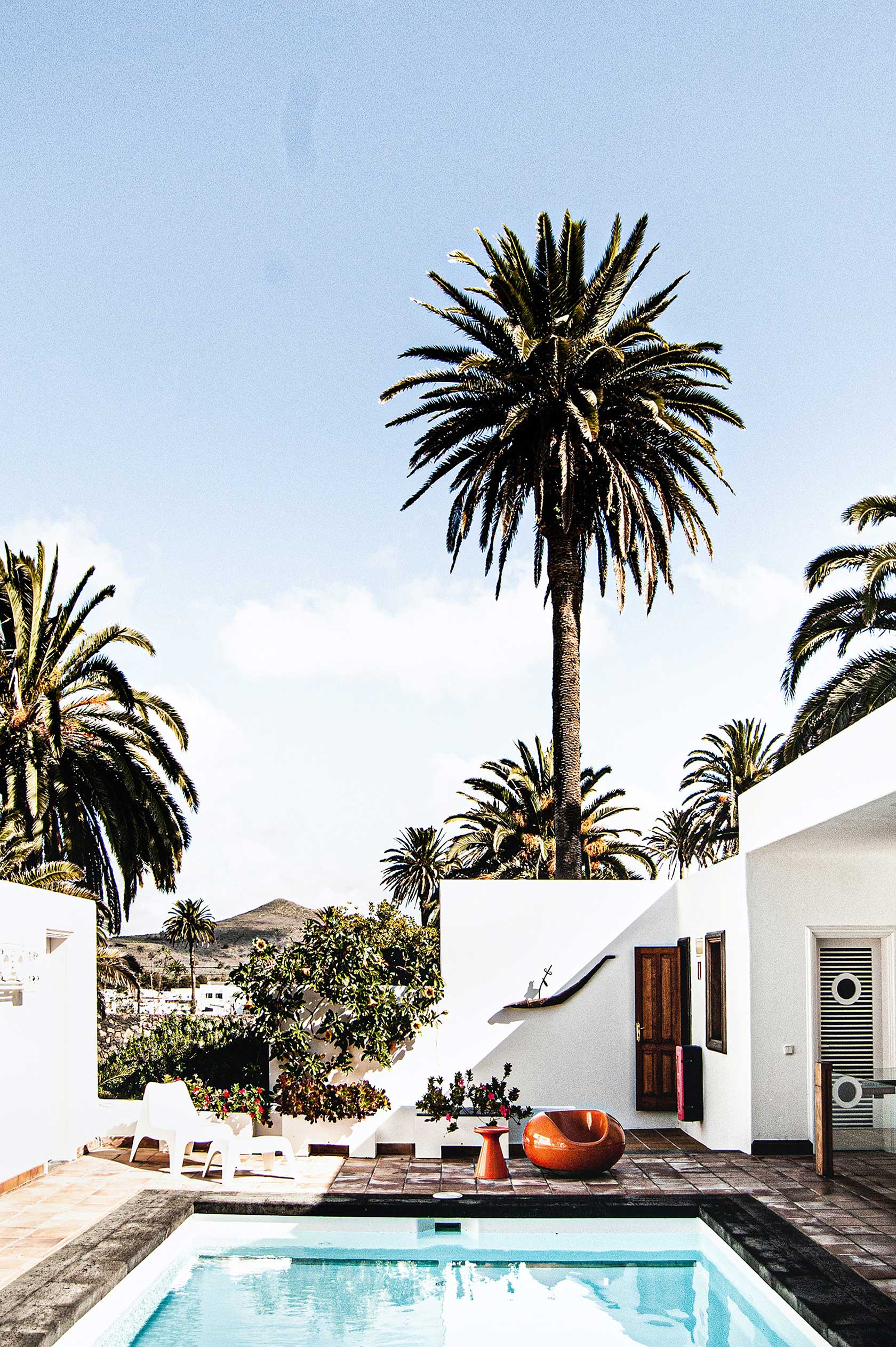 Costa Teguise is a good example of the development of sustainable tourism. The town is located near Lanzarote airport and the capital, Arrecife. César Manrique was very active in Costa Teguise, and he wanted to make sure that the development of tourism would go hand in hand with sustainability and the beauty of the island’s nature.

One of his most outstanding jobs as an architect is at the luxurious Melia Salinas hotel. The Melia Salinas is one of the many Lanzarote all-inclusive hotels. Tourists from all over Europe come to the island to relax and enjoy the sun and good weather. The lucky ones who stay at the all-inclusive Melia Salinas also enjoy some fantastic gardens designed by Manrique. The gardens of this hotel are a perfect example of the synchrony between functional architecture and ecological design. The complex is made up of three gardens in the three courtyards of the building. If you have a decorating project for a patio, you are interested in paying attention to these fantastic indoor gardens. The vegetation is arranged in planters that cascade through the floors of the building. In the centre, it presents a small lake.

Manrique used this type of design in other works. The largest of these was the huge Vaguada shopping centre in Madrid. The architect thought that the interior spaces could offer much more nature and greenery to man. He was obsessed with nature regaining spaces lost by the work of man. Your decoration project does require to be so huge as a shopping mall or an all-inclusive resort to take advantage of some of the ideas present at these gardens.

As in the case of the cactus garden or the Vaguada in Madrid, these lakes were developed in spaces that had been mistreated by the hand of man (the lakes were built in a natural area that had been partially misused). The architect’s job was to restore order and harmony where men had made it disappear.

Lago Martianez is a perfect example that shows us that beauty in design can be perfectly associated with utility. The north of Tenerife was the first area to be developed for tourism. This area has a handicap for holidaymakers: the abundance of waves makes it difficult to enjoy the beaches for swimming. The Martianez lakes sought to solve this problem with water spaces, artificial beaches, green areas and solariums. 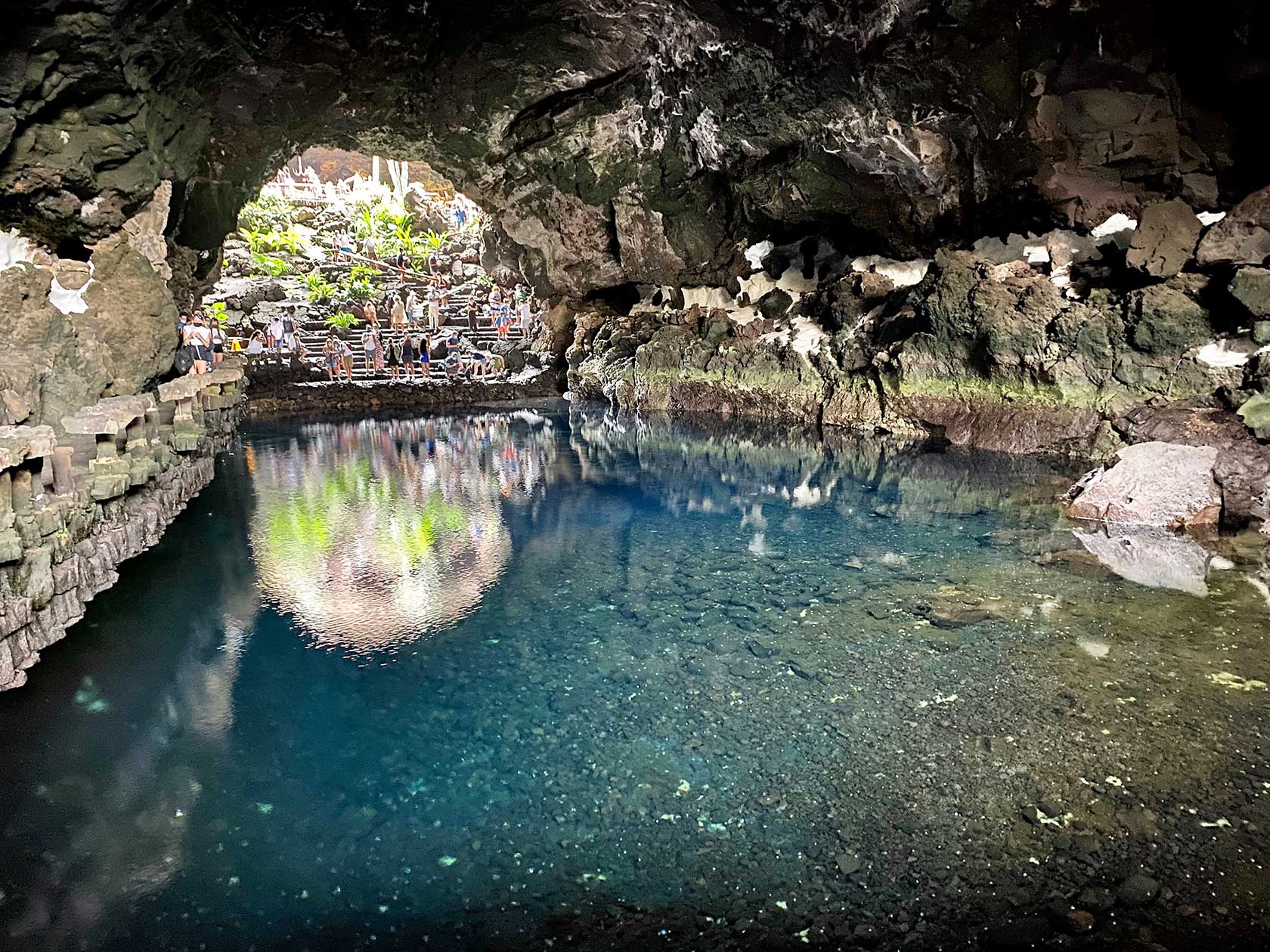 The fourth project that we want to mention is possibly the most spectacular of those mentioned and the one that is usually best valued by visitors to Lanzarote: Los Jameos del Agua.

In this singular space, Manrique found originally a natural area of ​​enormous interest but which was in poor condition. The roof of a volcanic tube through which the lava ran in ancient days was collapsed. The architect transformed it into a space of enormous beauty in which harmony and beauty reign. White, blue, green and black shape the space. These were the artist’s favourite colours, which he borrowed from the nature of his island. Today this space houses an auditorium, and its design has attracted architects from all over the world who seek to apply some of its concepts to their works.

As in the rest of the works shown, inspiration should not be gathered from these works; all-inclusive hotels or public spaces may not sound like your everyday home garden since they are all huge investments and projects of millions of pounds. Inspiration is found in every little corner of them. In the sense in which nature is associated with architecture, spaces are transformed into terraces and vertical gardens to maximize sensations.

The work of this singular genius and his work of educating the local population of Lanzarote in respect of tradition when planning their own homes, houses and gardens is felt everywhere in the island today, and it served for Lanzarote to receive the seal of a Biosphere Reserve.

8 Environmentally Friendly Changes To Make To Your Garden This Summer

How To Turn Your Balcony Into A Lush Garden Paradise

Pesky Purge: Tips And Tricks To Rid Your Outdoor Space Of Mosquitos