If you asked this question just a couple of years ago, you might well have got a few funny looks! But the fact is, street art of a variety of kinds has been making its way towards the home years now. For example, fans of YouTube may have noticed a trend amongst the “trendiest” of channels, whose office walls began to be adorned with high-quality, graffiti-inspired designs a little over two years ago.

Living Rooms & Graffiti – Chalk & Cheese, Or A Match Made In Heaven?

Once viewers of those insanely popular channels caught a glimpse of the ultra-modern, uber-cool workspaces being created by their YouTube idols, street art soon became a fashionable way to decorate the bedrooms of urban lofts and apartments.

Countless examples of this type of design can be found in the search directory of Google Images. Is graffiti art really a suitable decoration methodology for a living room, though? I’m sure my parents would be horrified, but the answer is a resounding yes for the younger generations, and it is only becoming more popular with each passing year.

The Style Spreads From Hallways And Bedrooms To The Living Room

I suspect that many of those living in bachelor pads or groups of university-age young adults sharing student accommodation (I’ll refrain from using the hideous titles the past two generations have been labeled as) would have loved to have seen their living room walls adorned with this type of art long ago.

Until recently, however, even members of the younger age groups appeared to be exercising restraint when decorating their most prominent spaces – relegating the street art and graffiti-inspired look to their bedrooms rather than placing it front and center of their dwelling’s primary rooms.

No more, it seems – graffiti art is now finding a place in the living rooms of many more people than just the younger crowds who had initially been attracted to this style of décor. It is not unusual to find all kinds of street art-inspired feature walls inside the homes of everyone from celebrities, creative professionals, software developers, musicians, financial traders, and those from every other walk of life.

Exposed brickwork goes with anything these days, from steel walls, corrugated roofing, and of course – the traditional white of apartments and penthouses. However, combining these elements with graffiti-inspired art can be truly awe-inspiring, as seen in this street-art inspired room in a loft apartment in New York City: 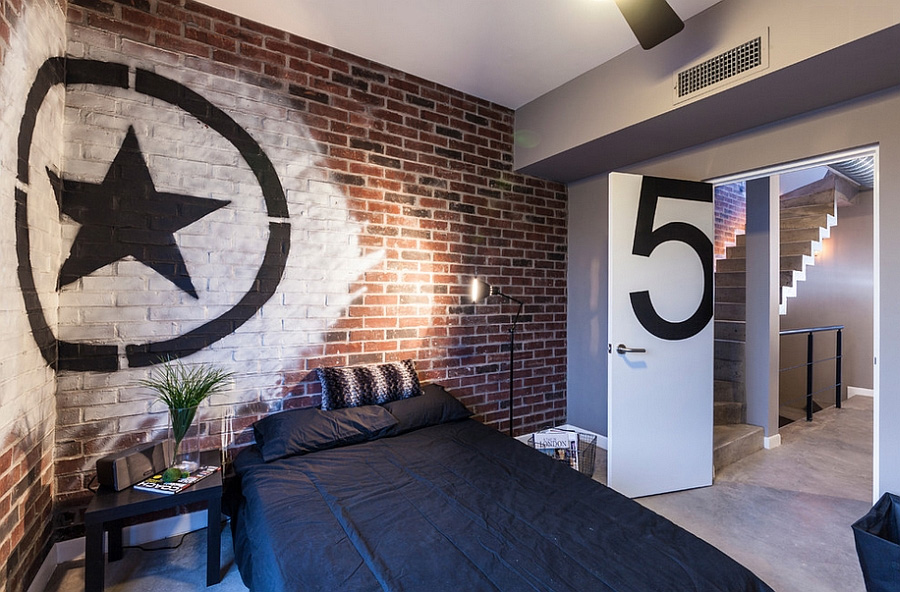 This example shows a bedroom, but the rawness of the star motif could work well in any room.

One style that really caught my attention was a combination of elements of both graffiti and street art. For example, a young child can be seen peeling back curtains, peeking behind a door, or tearing away paper (all in an illustrated fashion) to reveal a graffiti piece behind.

There were numerous examples of this kind of work on sale at Amazon and at several different online galleries – the graffiti art hidden behind the covering can be just as varied as the method the child is using to reveal it, so it’s easy to see how this type of work could fit into a multitude of different environments – explaining its popularity. From painting-sized prints to full-wall displays, look at these examples of how the same piece has created many different effects. Might something similar to one of these examples suit your own living space?

Forget the stereotypical image associated with the word graffiti – the painting shown above in the office of Linus Tech Tips demonstrates that talented artists are now taking a keen interest in this discipline. But, inevitably, whenever any artform reaches the point of commercial and mainstream success, some will mourn a perceived loss of authenticity that results.

However, there is nothing to stop kids from hitting the streets with their spray paints and “keeping it real” if that is how they feel. Those who are more willing to take an open-minded approach should revel in the recognition that can only come with mass-market appeal.

And remember, it isn’t just your walls that can be spruced up with a little graffiti-inspired flair – furniture such as tabletops, fabric surfaces – particularly cushions and other soft furnishings – and perhaps even a graffiti-enthused skin for your laptop or tablet could all add some urban chic to your living room. It may even better suit the tastes of those who prefer a more traditional look to their walls and ceilings.

There’s no escaping it, though – street art is making a splash in a big way and looks like it is here to stay for some time yet.

There Is A Place For Tree Grates In Modern Cities

What Is The Importance Of Urban Modern Interior Design?