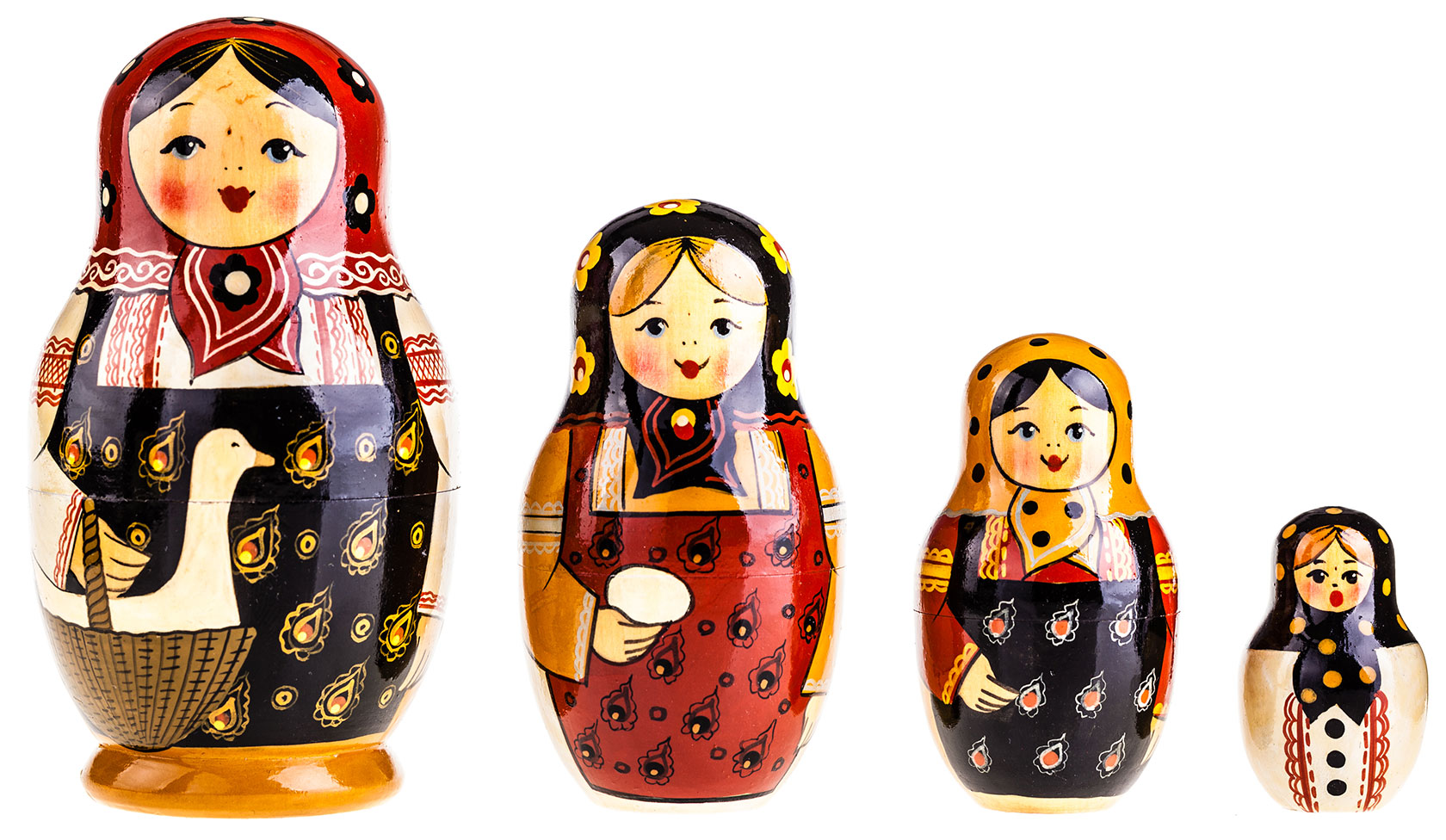 Matryoshka is a folk didactic toy. Didactic means teaching. What does she teach, and what does she develop in young children?

In the classroom with nesting dolls, children master the ideas about the size of objects and about actions with them (a large matryoshka cannot be put into a smaller one), perception develops (you need to combine the drawing on two halves of the nesting doll so that it matches).

Kids learn direct and reverse actions (disassemble – assemble), learn to do actions in a certain sequence, which develops memory (they need to remember the sequence of actions and then repeat the actions of an adult).

The kid also learns to bring the matter to an end and achieve the result (assembled matryoshka). It is very important that in playing with nesting dolls, the result is clear – if you assemble the toy incorrectly, there will be an “extra” nesting doll.

When buying a matryoshka, check that all the details of the toy can be easily removed and put on (it happens that the upper part of the matryoshka is too “tight” put on its lower part, which will cause difficulties for the baby). You can buy a multi-seat matryoshka but not give your child all of its parts at once.

Approximate Sequence Of Games With Matreshka – Child’s Ability To Orientate In Size:

What can a child do on his own while playing with nesting dolls? What matryoshka doll corresponds to his level of development? How to select the necessary parts for a child’s play from a multi-seat matryoshka so that he can do the task himself? It largely depends on the age of the baby and his skills.

1 year 1 month – 1 year 3 months – two nesting dolls with a difference in the size of about 3 cm. The small nesting doll cannot be opened.

From 1 year 3 months to 1 year 6 months. Two nesting dolls with the same size difference, but both are detachable (that is, they consist of two parts and are open and close).

From 1 year 9 months to 2 years – three nesting dolls with the same size difference, but all three are detachable.

From 2 years old to 2 years 6 months – the baby can assemble a 4-5 local matryoshka by himself, all the nesting dolls are revealed.

From 2 years 6 months to 3 years – the child learns to assemble a 6-seat matryoshka, while all the nesting dolls are detachable (open and close).

How To Teach A Child To Connect A Two-Seated Matryoshka?

In the first game with a nesting doll with a toddler at the age of one and a half years, it is best to give the baby two nesting dolls – one large (of two parts) and the other a small one-piece. We will not only teach the kid how to fold the matryoshka but also introduce the words “big” “small.”

Step 1. First, we introduce the baby to the matryoshka. Show your child a large nesting doll, tell them how beautiful, bright, smart, in a scarf and a blouse (by commenting on our actions, we lay the foundation for the accumulation of words in the child’s dictionary, even if he does not speak yet). Shake the matryoshka – Oh, it rattles! What is thundering? Open the nesting doll and show the nesting doll – baby. Close the matryoshka and place two matryoshka dolls side by side in front of the baby.

Ask your kid to show you a small matryoshka and a large one. We can hide a small nesting doll in our palms, but not a large one.

We help the child internationally: we speak about the big matryoshka in a lower voice, the small one – in a high and thin one.

Step 4. Give the kid the nesting dolls for him to play on his own. Let him try to get a little nesting doll. Then it will close the big one. Will play with them.

Let’s call the matryoshka go-go, go-go” or any other action that will be interesting for your baby. Let the child show you where the big matryoshka is, where the little one is.

Step 5. We collect the matryoshka, and she goes for a walk or goes home: “top-top-top.”

So you can work with nesting dolls from about 1 year 2 months to 1 year 6 months. One such game – a lesson with a child takes no more than 5-7 minutes, and it is better to repeat it several times with different actions of nesting dolls in step 4.

If the child shows interest in the toy and easily copes with the tasks, you can give him a triple matryoshka in the next game.

Shopping Tips For The Best Trampoline For Kids

6 Ideas To Decorate Your Child’s Bedroom

Parent Tips: How To Setup A Newborn Baby Room