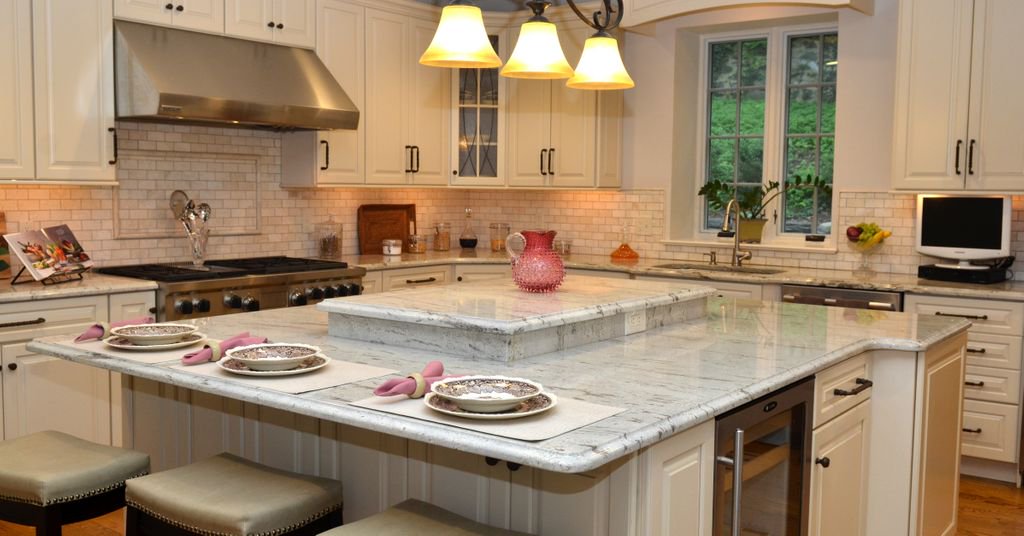 Marble has been valued for its beauty and functionality for thousands of years. Its natural abundance, ease of extraction, and structural properties make it ideal for building. Aesthetically speaking, its swirls and veins give it a visual appeal like no other dimension stone. Marble’s look speaks for itself, but it first became associated with elegance and sophistication as a prominent part of art and architecture in Ancient Rome and Greece. The word marble is likely derived from the Greek word marmaros which means to gleam, sparkle, or shine.

Marble is created by the recrystallization of limestone under intense heat and pressure. It can be found in many countries, but Italy, Spain, China, and India are the worldwide leaders in marble production. The intense application of heat and pressure over millions of years, known as metamorphosis, incorporates impurities that surround the limestone into the newly formed rock. Clay, silt, sand, and serpentine rock are just a few of the materials which can give marble its distinct colors and striking patterns. The unique process of formation has created perhaps hundreds of distinct types of marble, with a handful of these being the most popular and commonly used. This geologic process sets marble apart and makes it different than all other stones.

Foliation is a characteristic of many metamorphic stones which indicates the existence of different layers. A lack of foliation is one of the properties that make marble such an ideal stone both functionally and decoratively. Unlike other metamorphic rocks such as gneiss, slate, and phyllite, marble is solid and smooth. Isotropy describes how marble is not directional. If a piece of marble is cut from the top, side, or at an angle, the resulting pattern will appear nearly the same. Homogeneity is a similar property that describes the uniformity of marble. This important property means that desirable visual characteristics are consistent throughout the material: the unique patterns are unending and non-repeating. When marble is used on a long countertop, for example, you needn’t worry that one end of the surface will be beautiful and engaging, while the other end appears dead and devoid of interest.

The way that light interacts with marble plays an important role in the gentle luster that gives it a glow compared to the shine of other dimension stones like granite. The degree to which a surface affects the path of light into it has a great effect on the appearance of that surface. Surfaces with a high refractive index greatly bend or refract light, which prevents the light from penetrating. The light that is reflected from these materials results in a shiny surface. The refractive index of marble is quite low, which means that light can penetrate its surface before being reflected away. It is this quality that gives marble countertops their glow and that brings marble statues to life. This quality is rare among stones and adds to marble’s distinctiveness.

The Renaissance period in Europe drew inspiration from the ideas and the culture of the Classical period. It is marked by a new appreciation for the elegant style that marble gave to the architecture and sculpture of Ancient Greece and Rome. The stone once again became a prominent part of the most important construction and decoration projects of the time. During this period, domes, arches, and columns, could again be seen across the continent. Marble sculpture became a prominent part of the cathedrals and churches which were built across Europe during this time.

The Baroque and Rococo periods of the 17th and 18th centuries elevated the appreciation for marble. During this time the emphasis on detail and embellishment lent to marble becoming a common part of mantles, staircase, and courtyards. The popularity and ubiquity of marble as a brilliant design element had been escorted from the ancient world through the enlightenment period and into modern Europe. Ideas and beliefs were changing but people could not deny the visual appeal of this traditional stone.

The founding fathers of America borrowed so many ideas from the Classical Period and the Enlightenment, so it is no surprise that marble can be seen in the earliest examples of American architecture. When marble began to be quarried on the Potomac River in the early 19th century, it was incorporated into the U.S. Capitol building. Eventually, marble was quarried from twelve different states and was used in many of the buildings elsewhere on Capitol Hill. So began the modern use of marble in the western hemisphere.

Marble found its way into the lives of everyday people in household kitchens. Stone countertops are popular for their functionality and their stylish look. Unlike wood and Formica, stone countertops can withstand repeated exposure to water and heat. Theoretically, there would be no difference between granite, soapstone, slate, and marble countertops. The difference in how these stones stand up to environmental challenges is not extreme. Slate can indeed be brittle at the corners and edges, and soapstone is susceptible to knife marks, but a big part of the decision between natural stone countertops comes down to appearance. Many people agree with their Classical predecessors: as far as beauty and elegance are concerned, marble simply cannot be beaten if it is properly sealed. No matter the theme of your kitchen, marble will match your design because of its classic nature.

Nature has proven itself to be the greatest designer. The natural processes by which heat and pressure are applied to stone, melding it with itself and impurities within, are what creates the dazzling designs and patterns in marble. Granite is not a metamorphic rock; it doesn’t benefit from this natural design process. Slate and soapstone are both metamorphic rocks, they are “baked” in nature just like marble, but they don’t produce the same results. Soapstone and slate are also less durable and lack the classic beauty of marble.

Marble came to be recognized for its unique beauty more than 2,500 years ago. The ancients valued it for its ability to give life to statues and solidity to architecture. Later Europeans valued it for the same reasons, and it continued to be a symbol of class and elegance through the enlightenment period. Drawing inspiration from both the enlightenment and Classical Period, it’s no surprise that marble has been a part of the American aesthetic from the very beginning. Marble’s popularity today can be attributed to all of these things, and also the fact that marble has undeniable visual appeal with or without the validation of those before us.