Grow rooms have become popular with many people because they make it possible to grow plants indoors. These rooms use special lighting arrangements to provide plants with the right light spectrum that they need to perform photosynthesis. There are different types of grow lights that can be used in these rooms, with LED lights being a convenient option. Many people don’t realize that they should wear LED grow room glasses when they grow plants in rooms with LED grow lights. 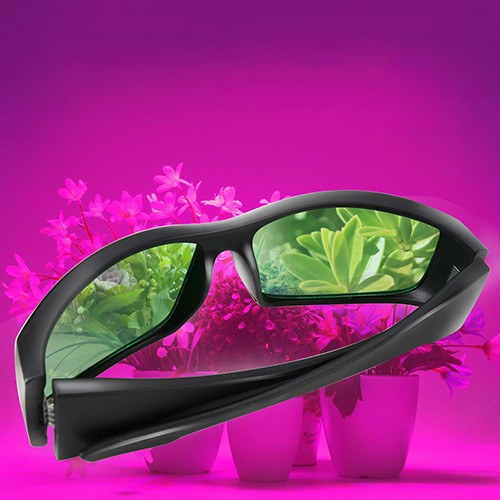 Depending on the intensity of light, it can be harmful to human eyes, with some forms of light being worse than others. On the electromagnetic spectrum, the human eye can only see a small amount between infrared light and ultraviolet light, with ultraviolet light being more dangerous, and blue light being more dangerous than that. Sunlight contains UV A, B, and C, with C being the most harmful and A being the closest to what we can see ( according to the University of Iowa). Grow lights, such as the LED-based ones, can contain all three forms of UV light and blue light, depending on the diode, intensity, and color.

Blue light affects the body by suppressing melatonin secretion, which changes the circadian rhythm, making sleep more difficult to achieve and increasing the chances of fatigue. Human vision is also affected, as the blue light will reach the retina because our corneas have problems blocking it. Massive exposure to blue light can cause deterioration of eyesight and eventually lead to permanent blindness.

The UV light is known to cause health problems such as skin damage and even cancer. It’s also quite harmful to the eyes in the A, B, and C forms. While UVC is the most dangerous, it’s mostly blocked by the atmosphere, and it’s not contained in as many grow light as UVA or UVB, or if it is, only small amounts are emitted. On the other hand, since UVA and UVB are more prevalent in grow lights, they are likely to cause the most damage. Like blue light, UVA reaches the retina because of poor filtering by the cornea, which leads to cataracts and other vision problems.

The cornea filters out UVB, but it still presents a problem because UVB hits the surface of the eye. Photokeratitis, a form of cornea inflammation can occur, along with eye growths known as pterygia and pingueculae. These can all lead to temporary blindness.

Since all of these problems can occur when the eyes are exposed to LED grow lights, glasses are a necessary form of protection. Even though you may only be working with a small LED fixture or your exposure to the lights may be short, you should still get some glasses just in case. When it comes to protecting your eyes from damage, it’s better to be safe than sorry. One form of protection that people usually gravitate to is sunglasses since they are more than likely to have already a pair of sunglasses lying around. Still, there’s a reason that you should use LED grow room glasses instead.

LED grow room glasses and sunglasses do a great job of protecting your eyes from harmful light, but the LED glasses have the advantage of being designed around LED to grow lights. These glasses are fined tuned to cooperate with a specific spectrum in mind to let everything viewed in the glasses look natural. Anything seen through a pair of sunglasses will look shaded. When you’re looking at plants to see if any colors don’t look right, or trying to find any problems that may affect the health of the plant, you want to have the ability to see the plants as naturally as possible.

When choosing LED grow room glasses, you have to keep the type of light that you’re using in mind. Most glasses cover light produced by blue and red diodes that emit UVA and UVB but may have difficulty with some all-white diodes. In that case, a different set of glasses would be necessary. Canada Grows Indoors offers an excellent top 5 best led grow light glasses list and reviews that you can look at and see if they are the right ones for you.

Comfort is also a factor to remember when choosing LED grow room glasses. You’ll need glasses that will fit comfortably on your face without a lot of movement. If the glasses aren’t a good fit, then they may shift and result in the light reaching your eyes. While you attend to your garden, you’ll be exposed to potentially harmful light, and depending on how many plants you have, it could be for a while. The glasses you choose should be able to cover all of your eyes.

You only have one pair of eyes, and if you’re going to be working in grow rooms with LED lights, then you need a pair of LEDs to grow room glasses for protection. They’ll keep out the harmful forms of light that can come from LED grow lights while allowing you to see your plants effectively.

DIY vs Pro-Installed Solar Panels: What The Difference?

How To Style Black Island Lights In Your Kitchen